The Batteries of the 2nd/52nd

On 15 April 1959, the 2nd Missile Battalion was reactivated at Ft. Bliss as a Nike Ajax Missile Battalion of the 52nd Air Defense Artillery (2nd/52nd). The new unit was authorized 38 officers, 19 warrant officers and 624 enlisted men. However, the equipment, including the Nike-Ajax Missiles, was still on requisition. Shortly thereafter, on 25 September, the 2nd/52nd was reorganized as a Nike Hercules battalion. At that time, Lieutenant Colonel Loren F. Stewart commanded the Battalion. On 18 November 1960, the 2nd/52nd joined the 6th Artillery Group, located at Ft. Bliss, with a mission to become certified as a Strategic Army Corps (STRAC) unit.

On 29 July 1960, Lieutenant Colonel Harold A. Neill assumed the position of Battalion Commander. In December, the battalion was once again reorganized and its authorized strength set at 38 officers, 13 warrant officers, and 660 enlisted men. A real-time test of that capability was not long in coming.

The first assignment for 2nd/52nd came 13 September 1962 when Battery B was deployed to Johnston Island in the South Pacific as a member of the Joint Task Force 8. The purpose was to participate in Operation DOMINIC II to launch and detonate a Nike Hercules missile with a 10 KT nuclear warhead. On 4 November 1962, Battery B made history by launching the last nuclear warhead during an atmospheric test by the United States. However, before they accomplished that historical event, the other units of the 2nd/52nd would be deployed to play a significant role in America’s history: The Cuban Missile Crisis.

While garrisoned at Ft. Bliss, the 2nd/52nd had been alerted to prepare for deployment on 20 October. At this time, the men didn’t know of the situation in Cuba other than what had been in the news. However, it wasn’t difficult to surmise where they were going two days later on 22 October when they heard President Kennedy’s nationally televised address to the nation. As a STRAC unit, the 2nd/52nd had been preparing for a mission such as this. Their distinctive unit insignia reflected their motto, Semper Paratus, Latin for Always Prepared.

On 25 October, the 2nd/52nd with 38 officers, 13 warrant officers, and 660 enlisted men along with the 10th Signal Detachment with a contingency of 1 warrant officer and 10 enlisted men, and the 200th Ordinance with 1 officer, 2 warrant officers, and 41 enlisted men were ordered to deploy to South Florida. The deployment required an enormous effort by the officers and men. Not only did they have to tell their families and friends goodbye for an unknown period, but they endured an around-the-clock effort to load battalion equipment onto railroad flatcars at Ft. Bliss before departing for Florida. The equipment train consisted of 172 flat cars and the troop train consisted of 26 Pullman and 2 dining cars. At that time, it was the longest trains that had been on the Union Pacific/CSX rail systems. Upon being alerted for possible deployment, the 2nd/52nd planned to deploy by troop train but were delayed due to a bridge being washed out after heavy rains some distance east of El Paso. Temporary repairs were made to the railroad tracks and the train crept across the washed-out area and then headed east on 28 October. Travelling by way of New Orleans, the Florida East Coast Railroad finally delivered the troops deep into south Dade.

In 1979, the battalion relocated back to Ft. Bliss as a training battalion for NATO allied countries, the 2nd Missile Battalion of the 52nd Air Defense Artillery Regiment was comprised of a battalion headquarters battery and four firing batteries. Each battery has its own history and stories to tell.

Now, you can read the complete history in the recently-published Nuclear Birds in the Everglades. This 346-page book provides a concise narrative and photographic history of the 2nd/52nd from 1959 through 1983. A brief review of the contents of each chapter is provided below. 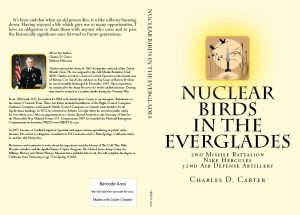 Available at Amazon.com or a signed copy by the author

For a book signed by the author, select the button below
for bank debits or credit card payments through PayPal.

To pay by check, email [email protected] for instructions.

Chapter One: The Cold War sets the stage by providing an abridged history of the Cold War, and the events related to Russia and Cuba that led to the Cuban Missile Crisis.

Chapter Two: The Cuban Missile Crisis explains the events and decisions in Cuba and Russia by individuals that would become a potential international existential crisis.

Chapter Three: America Responds reveals the behind the scenes of a young president who listens to his closest advisers but ultimately decides on the correct action.

Chapter Four: Homestead-Miami Air Defense explains how the men of the Nike Hercules and HAWK missile battalions deploy to South Florida to establish an air defense network to defend against Russian bombers with nuclear armor located in Cuba.

Chapter Six: The Batteries of the 2nd/52ndÂ is a battery-by-battery unit histories, both factual and anecdotal.

Chapter Seven: Nike Missiles and Missile Site explains the facilities an equipment on a Nike Hercules missile site. A bonus is the actual firing sequence has been provided.